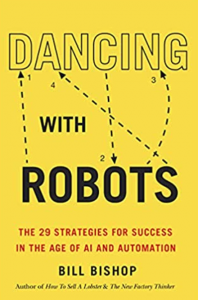 What does it mean to be a futurist – which is what Bill Bishop calls himself – in addition to being an entrepreneur, inventor, innovation coach, author, and international keynote speaker? In part, a futurist can write a book such as Dancing with Robots: The 29 Strategies for Success in the Age of AI and Automation – scheduled for review in Technical Communication.

How did Bishop come to be a so-called futurist? He explains how he came to be who he is today with the following story from https://www.bishopbigideas.com/about-bill-bishop.

“In his teenage years, Bill Bishop was dead set against a career in marketing.  His parents operated a small marketing company and to save money, they often used Bill as free labor in advertising and PR programs. At the age of six, he was cast as “The OFF Boy” in a series of commercials for the famous insect repellant.  At age 14, they dressed him up in a frog outfit to promote a local retail mall, followed by a humiliating stint in a pink bunny suit.

These indignities, along with many others, made Bill swear he would never pursue marketing as a career.  Yet, in his early 20s, Bill was thrust back into the marketing world when he won a waiter contest by selling 1,400 lobsters.  This seminal event was so inspiring and lucrative that Bill concluded he actually loved marketing and decided to start his own marketing company. Since that time, Bill and his team of coaches have helped more than 5,000 entrepreneurs & CEOs in dozens of industries around the world develop and market innovative BIG Ideas.

Today, Bill is the CEO of The BIG Idea Company and the creator of The BIG Idea Adventure™, an advanced coaching program that helps entrepreneurs grow their business by creating, packaging, and promoting BIG Ideas.  He is also the founder of The New Economy Network, and the inventor of the popular board game Quibberish®: The Paraphrase Puzzle Game.

In addition, Bill is the author of eleven books including How To Sell A Lobster (now sold in 25 countries in 12 languages), The Problem With Penguins, Beyond Basketballs, Return of The Lobster, and Global Marketing For The Digital Age.  He was also the author of Strategic Marketing For The Digital Age (1996), the first book published about e-commerce and Internet marketing.  He also published The New Factory Thinker: Re-Wire Your Mind For Success In A Disrupted Marketplace and Going To The Net, a book about using psychology and mindfulness to excel at tennis and life.