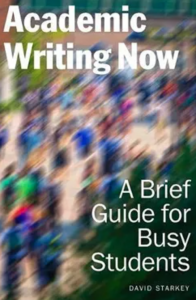 Academic Writing Now covers the expected topics of essay writing including high school versus university writing, how to organize an essay, what to write about, and the basics of logos, ethos, and pathos (p. 62). Of course, Academic Writing Now covers how to write a good introduction, body paragraph, and conclusion (plus transitions) as well as how to deal with graphics, research, editing, and revising as well as frequent errors. It is all there. Each chapter also includes ideas for class discussion and follow up work for an individual and a group.

Of particular note is a statement about what university professors really want to see in their students’ writing. Based on “talking to colleagues, holding workshops, and collecting written responses to a questionnaire” (p. 15), Starkey concludes that his “fellow professors wanted students to (1) be clear, (2) address their audience, and (3) stay on task” (p. 15).

Also of particular note is Starkey’s  handling of pronoun usage. In this second edition of Academic Writing Now, “when the gender of the referent is unclear, a singular noun will receive a plural pronoun” (p. 15).   Concerning the rationale for pronoun use, Starkey refers to a 2019 New York Times opinion piece (“It’s Time for ‘They.’”) written by Farhad Manjoo.  Manjoo states, “we should use  ‘they’ more freely, because language should not default to the gender bias.”

Note to readers: A version of this review appeared in Technical Communication.