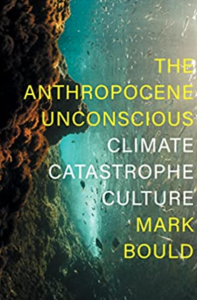 Human activity is having an environmental impact on our planet, and this period of time is considered by some to be a geological age known as the Anthropocene. Bould makes a comment about this period in The Anthropocene Unconscious as he argues that the Anthropocene has become part of humanity’s unconscious. He concludes this by looking at genres including movies and books that he feels reflect what he calls a climate catastrophe culture. This culture – according to Bould –  reflects how climate change and environmental catastrophe are actually central issues in our Anthropocene time.

An example of Bould’s commentary includes his thoughts on the Sharknado movie and its sequels (p. 19 – 21). These combination science fiction, comedy, and disaster movies reflect Bould’s concept of the Anthropocene unconscious. While the plots of these movies are comical,  there could be some serious concerns here as the movies tap into the unconscious fears people have. Consider how Bould states the “first recorded sharknado” (p. 19) was in 2013 with Hurricane David as Bould further states that “three massive waterspouts that would tear through the city formed and hurled sharks at unsuspecting Angelenos” (p. 19). Bould’s commentary here is an example of his thinking on the central idea of environmental catastrophe becoming part of our unconscious as reflected in a movie that might make us at laugh at least at times while still acknowledging a fear of an impending catastrophe.

In general, Bould’s comments in The Anthropocene Unconscious cover a huge scope of references to not only include a movie such as Sharknado, but also the Fast and Furious franchise as well as references to works of literature such as Melville’s Moby Dick and references to the writing of Jane Austin. His connections and comments can be a bit wild, but they are also thought provoking. He often combines a scholarly-type of explanation to a non-scholarly subject out of popular culture, and to get an idea of Bould’s scholarly-type writing style and related scope of ideas, consider this quote from the chapter he devotes primarily to comments about Fast and Furious. “From sharknadoes to slow cinema, from slabs of bourgeois solipsism to the crepuscular domain of ligneous lives, we have seen the Anthropocene lurking within texts that have little or no idea that that is what they are talking about” (p. 131).

In our professional and personal lives, we can ask ourselves what should and can we do based on what Bould observes about our collective unconscious about environmental catastrophes and our fears. Should we try in our own way to lessen the negative impact we have on our planet and that way address at least in part what concerns us in our collective unconscious about possible climate-related catastrophes? Could this mean at the very least drinking from a reusable cup, using fewer plastic bags when shopping, and of course looking out for massive waterspouts that could hurl a shark at us?

A version of this review is scheduled to appear in Technical Communication..